​Marlène Dietrich at the Colony Theatre

FRANCE FLORIDA FOUNDATION FOR THE ARTS 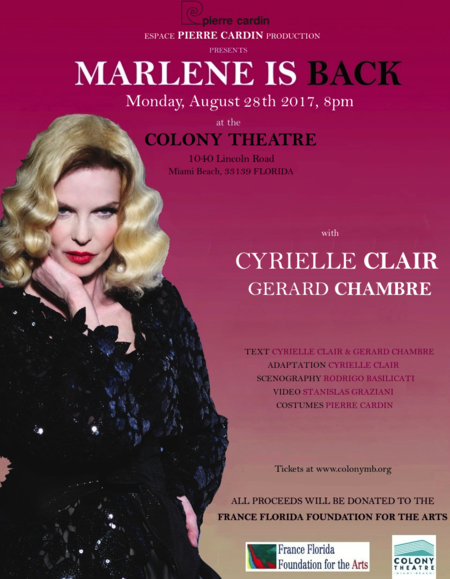 FOUNDATION FOR THE ARTS

​​"Marlene is back" is a theatre play produced by French fashion designer Pierre Cardin who also conceived the costumes of the show. In this portrait, Marlene Dietrich, one of the most fascinating actresses and singers of the 20th century, is revealed to the public. Behind the mask was hiding an inventive soul, a sensitive heart, a creative mind, dominated by a strong sense of rigor and discipline. This fragile and radiant beauty lived as a free woman, tasting the savors of love but always mastering her desires. She shined like a dazzling star across victories and defeats, aspirations and illusions. A woman of courage, she renounced her German nationality in protest against the Nazi regime.

The play will be performed in French, subtitled in English.

This special event is organized in partnership with the France Florida Foundation for the Arts (FFFA), the non-profit partner foundation

of the Cultural Services of the French Embassy in the United States. Presided by Dr. Melissa Patrylo, the FFFA was founded in 2004 to help local institutions promote cultural, educational and artistic exchanges between France and Florida, through exhibits, performances, lectures and concerts that reflect French quality contemporary creation.

To keep allowing you to participate in French high-quality cultural events in Florida, the benefits of the events will be donated to this foundation. We thank you for your generous support